Baume & Mercier’s story begins in 1830. Brothers Louis-Victor and Célestin Baume opened a comptoir horloger (watch dealership) in Les Bois, a village in the Swiss Jura.
The Baume brothers' business grew rapidly, and true to their motto, "accept only perfection, only manufacture watches of the highest quality", they forged a fine reputation through the creation of exceptional timepieces featuring the latest innovations.

Buy a Baume & Mercier Clifton Club Indian watch before 31st March 2019 for a chance to win a custom motorcycle! Terms and conditions apply. 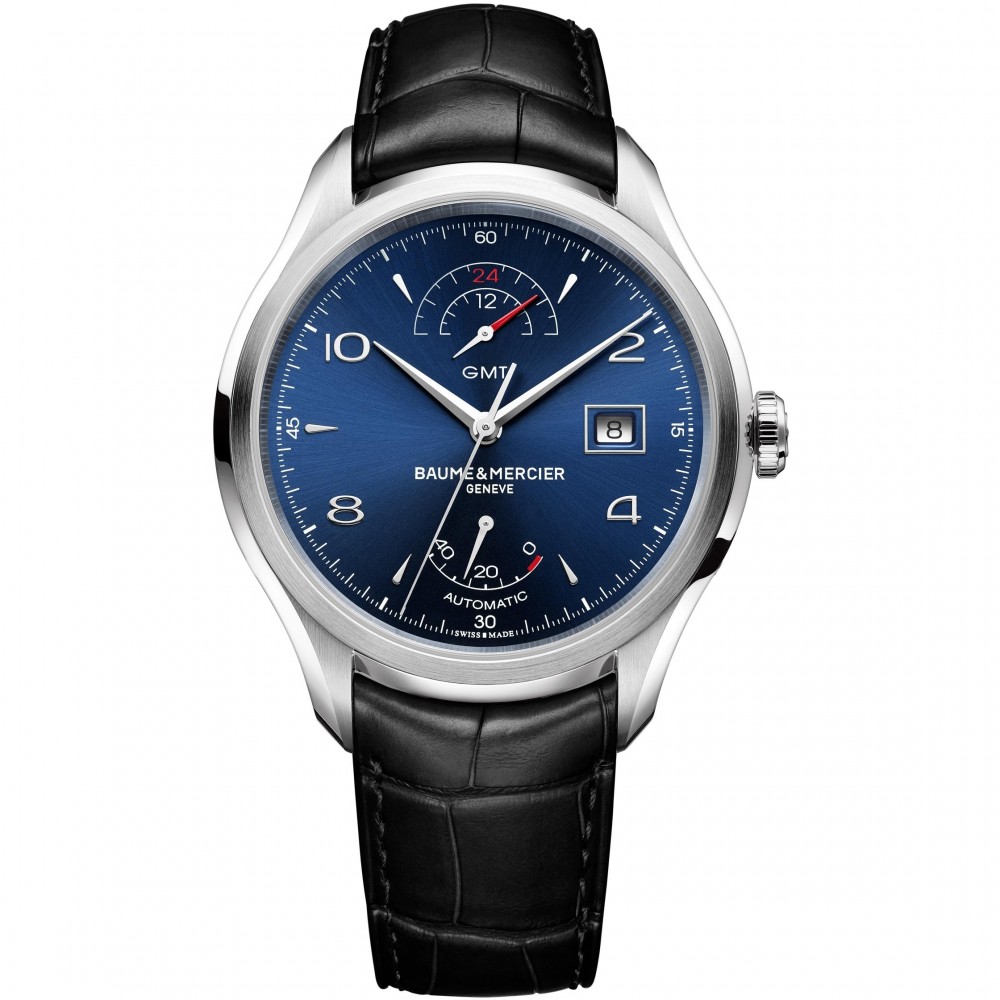 Embodying the Swiss watchmaking tradition and an elegant, urban spirit, the Clifton collection is both contemporary and iconic. 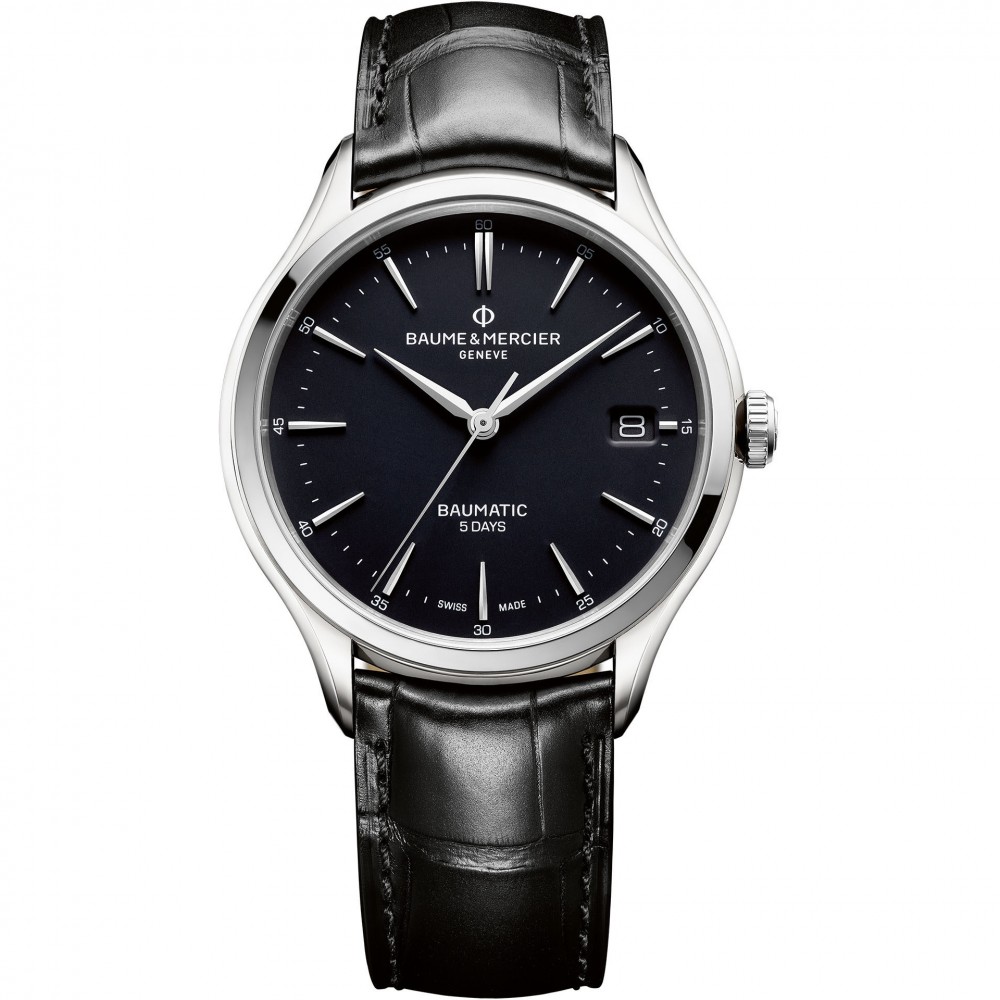 The Clifton Baumatic features the first in house movement from Baume & Mercier. The new movement has been designed with the wearer in mind, with a five day power reserve and antimagnetic to 1500 Gauss. It also has an increased accuracy only losing and gaining -4s/+6s. Due to the increased reliability of the movement, the service life has also been extended meaning the Baumatic collection needs to be serviced every 5 years, rather than every 3. 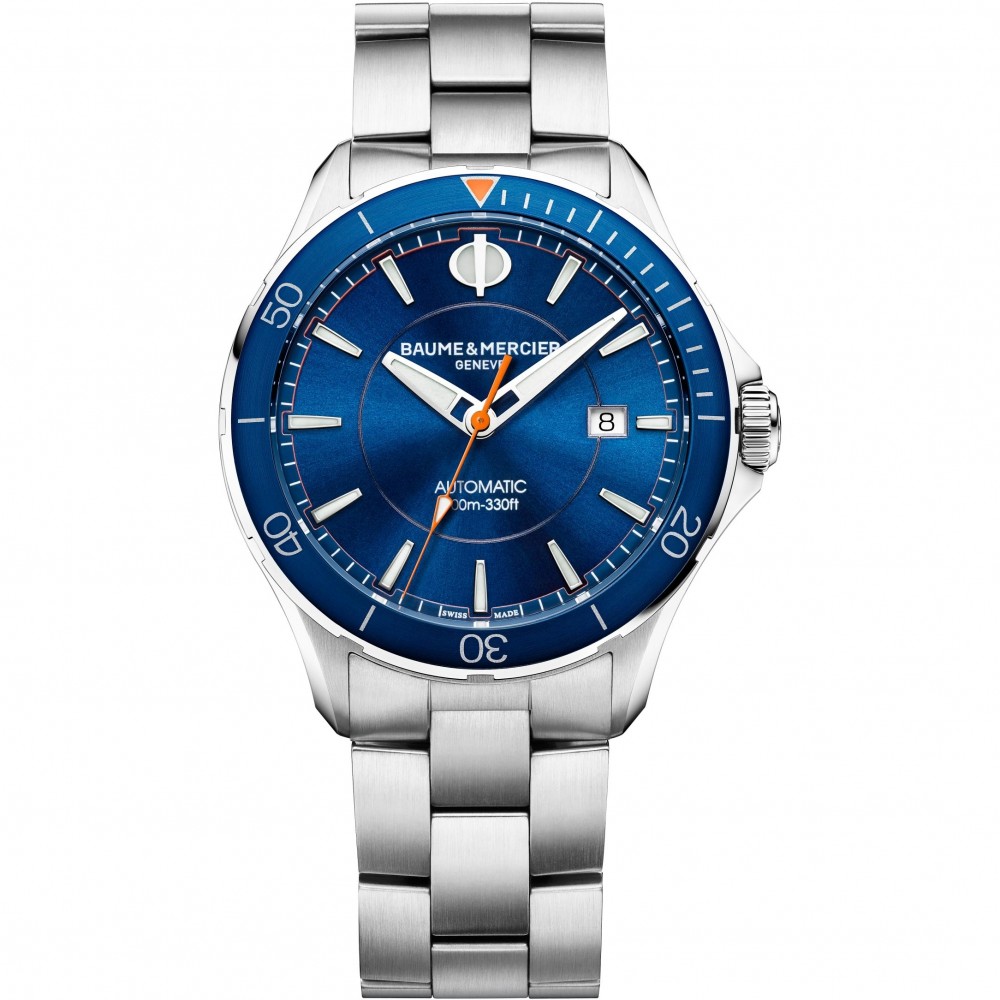 The Clifton Club collection pays tribute to “gentlesportsmen” with an offering of sports models that accompany urban, active and elegant men through everyday life. Built for adventure and versatility, the Clifton Club watch embodies a sporty design while respecting traditional watchmaking code. 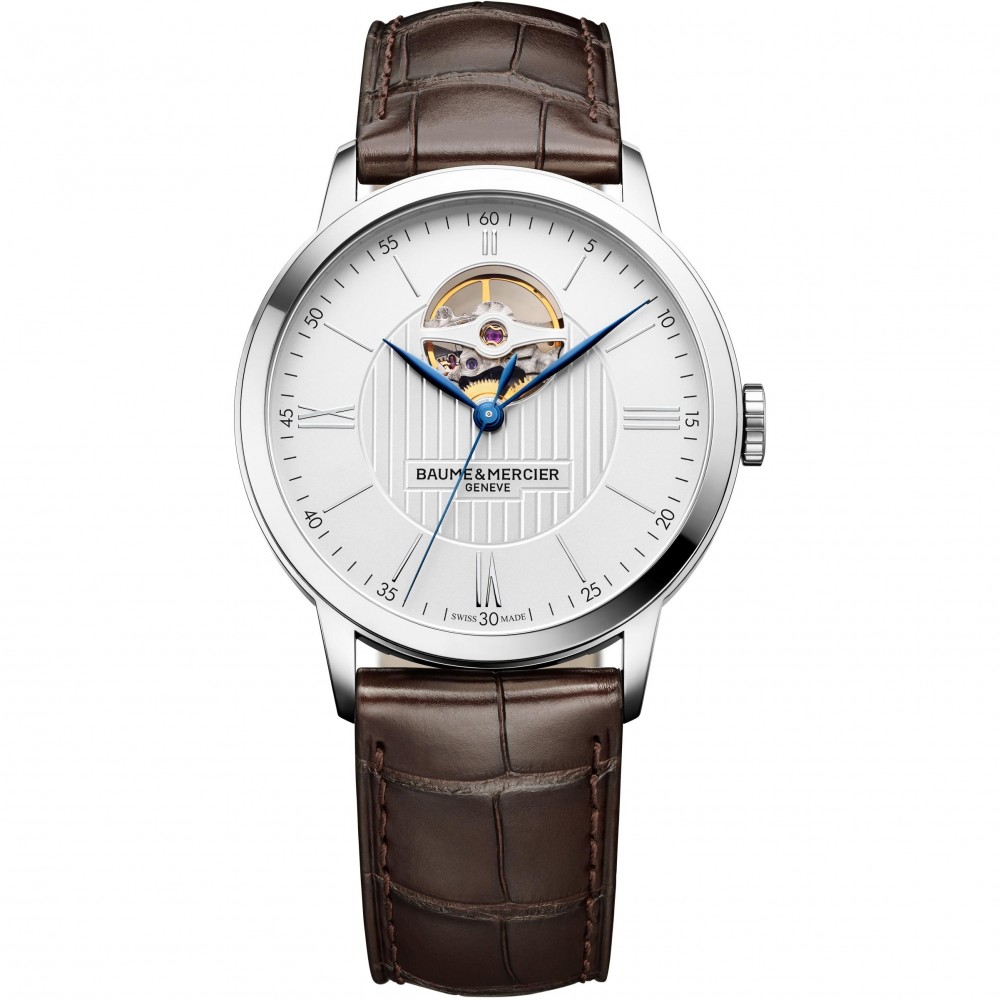 Combining authentic watchmaking expertise and simple timeless design, the Classima collection remains faithful to its original vocation for classic, discreet elegance. Featuring a variety of dials including some with the iconic lined guilloché pattern, these watches combine understated perfection with technical prowess. Classima is the perfect collection for those who appreciate a timeless watch with elegant and subtle design codes. 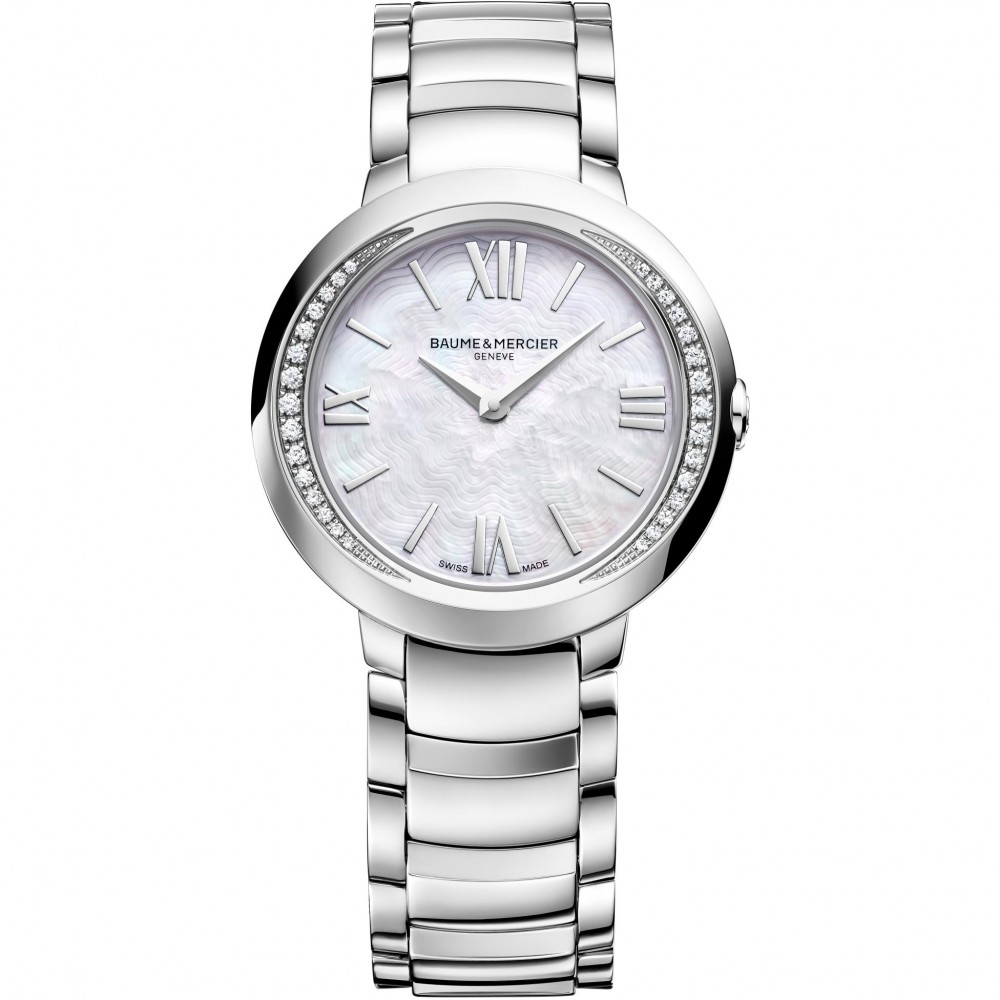 The Promesse watch, inspired by a 1970s model, was born from the idea of incorporating an oval inside a round shape. This unique and sophisticated design equipped with an integrated bracelet makes Promesse remarkably comfortable on the wrist. 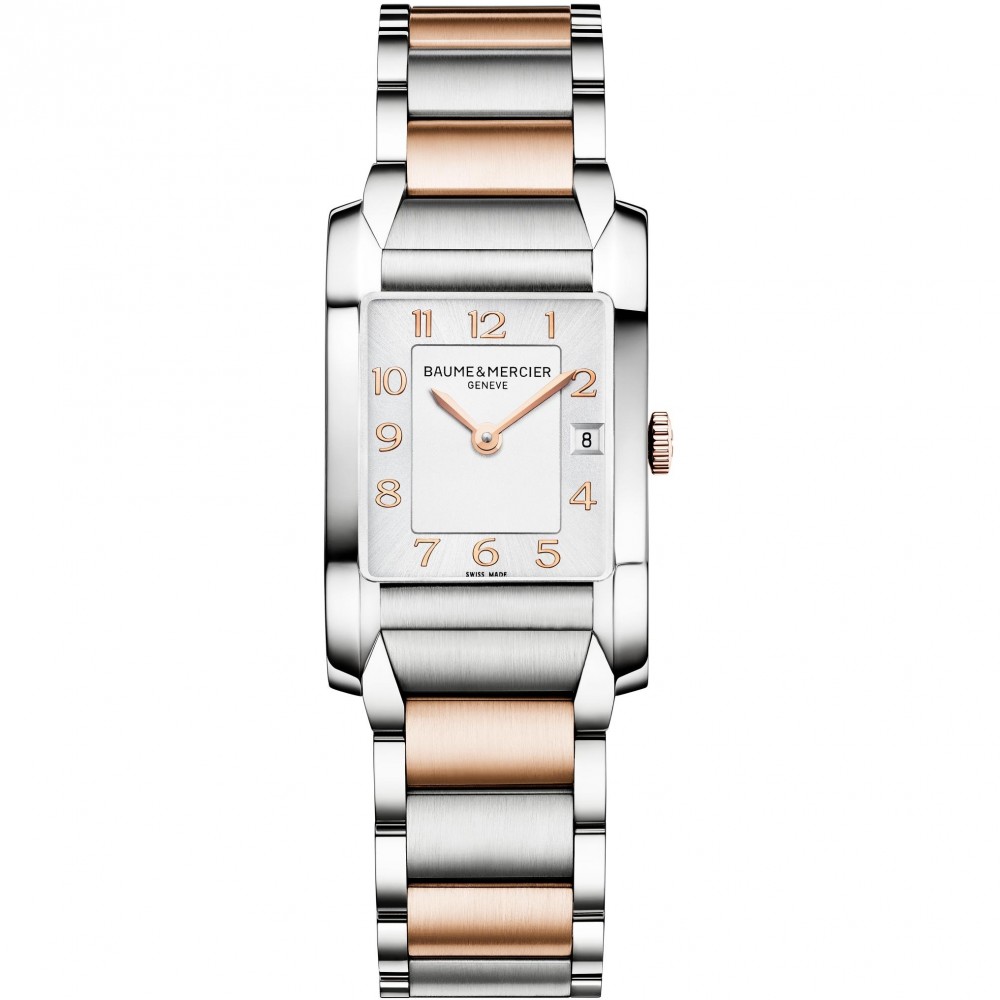 The Hampton collection comprises men’s steel models, driven by quartz or mechanical self-winding movements and fitted with alligator or calfskin straps. Available in various sizes, these Hampton models make perfect pairs with the models designed for women.
The Hampton collection is characterized by its unique rectangular shapes directly inspired by the original model and are set with brilliant-cut diamonds for ladies. The dials with their Arabic numerals appearing against silver-colored or natural mother-of-pearl backgrounds lend a precious and elegant touch to these watches radiating an aura of timeless chic.

The Baume brothers’ business grew rapidly, and true to their motto, “accept only perfection, only manufacture watches of the highest quality”, they forged a fine reputation through the creation of exceptional timepieces featuring the latest innovations.

Keenly aware of the potential represented by new territories, the company set up a Branch in London under the name “Baume Brothers”. It soon expanded throughout the British Empire. By the late 19th century, the company had already acquired a solid international reputation as becoming an inescapable watchmaking player broad.

At the time, the brand was best known for its chronographs and grand complication models. The company won ten Grand Prix awards and seven gold medals at international exhibition across the entire world. Its timepieces demonstrated a rare accuracy. In 1892, Baume won a competition held by the Kew Observatory near london with a chronometer pocket-watch equipped with a tourbillon movement of which the precision was to remain unmatched for over ten years.

At the beginning of the 1920s, the company director William Baume joined forces with Paul Mercier. Together, they founded Baume & Mercier, Genève, in 1918. The firm soon became one of the most active in the field of wristwatches by offering remarkably balanced special-shaped models.

In 1919, it was awarded the highest international distinction of the time in the shape of the “Poinçon de Genève” quality hallmark.

During the Roaring Twenties and throughout the Art Deco period, the brand established its style and left an indelible mark on watch design.

Paul Mercier knew that it was essential for the brand to live in step with its time and embrace change.

The firm grasped the importance of women’s emancipation and came to regard their desires as an unquenchable source of inspiration.

In the late 1940s, Baume & Mercier launched one of its most successful models: the Marquise. Impelled by this creative momentum, the brand creates a number of exquisitely creative and amazingly modern ladies’ watches. It thereby proved that watches for women are not merely miniaturized and simplistic interpretations of masculine models.

At the same time, Baume & Mercier was becoming known among a public looking for new products, and launched its first innovatively shaped wristwatches. These chic, urban watches kept step with life’s many special moments by embodying an art of living instilled with inimitable elegance.

During the 1950s and 60s, the company, constantly in pursuit of the equilibrium symbolized by the Greek letter Phi – the current Baume & Mercier logo – laid the groundwork of what is now considered the archetypal traditional round watch. It thus launched various chronographs equipped with functions such as moon phase or triple date displays.

Constantly demonstrating its creativity, Baume & Mercier unveiled innovatively shaped timepieces during the 1970s, such as the Galaxie and the Stardust, which won prestigious international awards including the Golden Rose of Baden-Baden. In 1973, Baume & Mercier brought out the Riviera, one of the world's first steel sports watches. In 1988, the firm joined the Vendôme group, now Richemont, and enriched its collection with a number of successful models which immediately established themselves as the brand’s flagship lines.

Baume & Mercier has been developing its expertise for 188 years. This expertise is based on the principle of “établissage”, meaning every stage in the creation of a timepiece is controlled in-house, as is the assembly of its various components. This choice reflects the Maison’s strong principles and is a guarentee of the highest quality.
This tradition of excellence at Baume & Mercier is based on the design and development of its products at the Maison's headquarters in Geneva, and on the "établissage" process carried out at its workshops in the Swiss Jura, in Les Brenets. This means that watch production is centralized in Switzerland. Baume & Mercier attracts the best talents to ensure it achieves the ultimate quality and respect for tradition; this has been the Maison’s strength since it was founded.

Each of our watches is a result of the passion of our master watchmakers and a desire to innovate, which is reflected in thousands of sketches, hundreds of hours of modelling, and years of development.

The skill of our design studio lies in finding the balance between artistic creativity and technical possibilities, which is the responsibility of our development engineers.

The assembled calibers and cases are submitted to the most stringent individual tests to ensure every timepiece functions according to Baume & Mercier's specifications. The mechanical watches are tested on a machine for the movement’s accuracy and power reserve. Their function controls are also tested: setting the time, jumping date, chronograph and any other complication.
The watches then undergo thermal shock testing, which highlights any hidden flaws. Every watch made at the workshops in Les Brenets also undergoes a number of visual and aesthetic checks. Lastly, to ensure consistent and flawless quality, each finished piece undergoes a final meticulous check before being sent to one of our approved retailers.

Back to the top